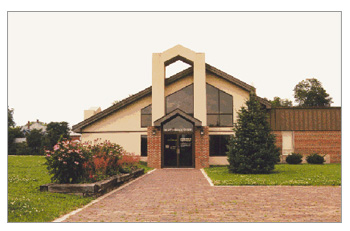 Located on the site of the former Lincoln Junior High School, the Lincoln Center’s museum offers you a chance to view exhibit areas which focus on a variety of local historical themes. The exhibit areas include the Beloit Gallery, Arthur Missner Veterans Gallery and Memorial, the Ted Perring Sports Hall of Fame, and the Beloit Hall of Fame (view the Memorial and Hall of Fame members at the above links.)

The Center also houses the Beloit Historical Society's offices, archives, community room, collection storage rooms, and the Luebke Family Memorial Library. Researchers, genealogists, and curious visitors are invited to use the Society’s research materials. The Society staff is on hand to answer any questions you may have and to guide you in your research.

Call or stop in for more information or for hours of operation.

The gallery is available for rental and is used for various educational programs. Artifacts from the Society's collection are displayed around the edge of the room.

The veteran's gallery is home to changing exhibits on veteran's subjects and war-related artifacts. The Veterans Gallery also houses a permanent veteran's memorial containing the names of those Beloit area citizens who died in war, from the Civil War through Vietnam. 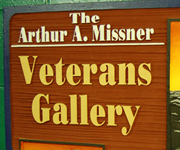 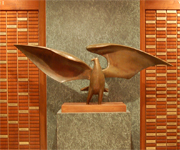 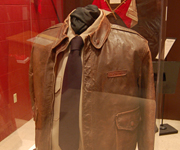 This gallery has a changing exhibit highlighting local sports history. Each year individuals from the Beloit area who have made significant contributions to sports are installed in the Hall of Fame at the annual Sports Hall of Fame induction and dinner. A short biography of each person is on permanent display in this gallery. 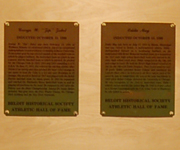 As Beloit observed its centennial in 1936, the idea developed that a “Hall of Beloit Builders and Founders” should be established. In January of 1938 Oscar Nelson (inducted 1975), secretary of the Beloit Commercial Club, proposed that the “hall” be established “for the purpose of perpetuating the memories of men and women, who in life, gave generously of their time, talents and means to the building of our city.”

The original 25 inductees had their portraits painted by the noted local artist E. M. R. Weiner (inducted 1976), and they were presented to the public in a ceremony at Grinnell Hall June 16, 1940. From Grinnell they were moved to the old Beloit Public Library, then to the Hanchett-Bartlett house when that became part of the Beloit Historical Society. Today Lincoln Center is their home.

The outbreak of World War II shelved plans to continue inducting members, and it wasn’t until 1966 that the project was revived. M. Walter Dundore (inducted 1974), curator of the Beloit Historical Society, and Bart Swindall, executive director of the Greater Beloit Chamber of Commerce, brought the concept, now titled the Beloit Hall of Fame, back to life for Beloit’s Heritage Days celebrations.

In every year since, Beloiters have continued to be inducted into the Beloit Hall of Fame, “... individuals whose efforts and vision for a better community distinguished themselves during their lifetime by making a significant contribution to the greater good of our Beloit area and its citizens, this Nation, and mankind, or otherwise brought fame to our community irrespective of their residence at the time of death.”

The Hall now numbers over 200 of these notable men and women, whose biographies are on file at the Lincoln Center. 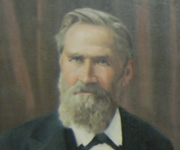 The Community Room at Lincoln Center is available to the public for rental. Originally the cafeteria of the old Junior High, the room can accommodate up to 120 people. Kitchen facilities are also available. Call for availability and pricing.

The Luebke Family Memorial Library was dedicated in memory of Judge Arthur Luebke, Martha Luebke, and Ellen Luebke. With an impressive collection of historical books and documents, the library is available to the public for research. 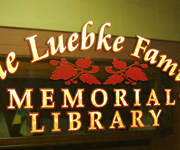 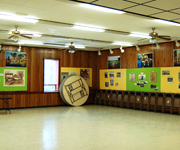 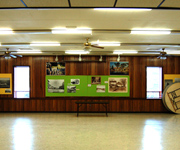